Why You Should Produce Your Next Video or Film in Dubai 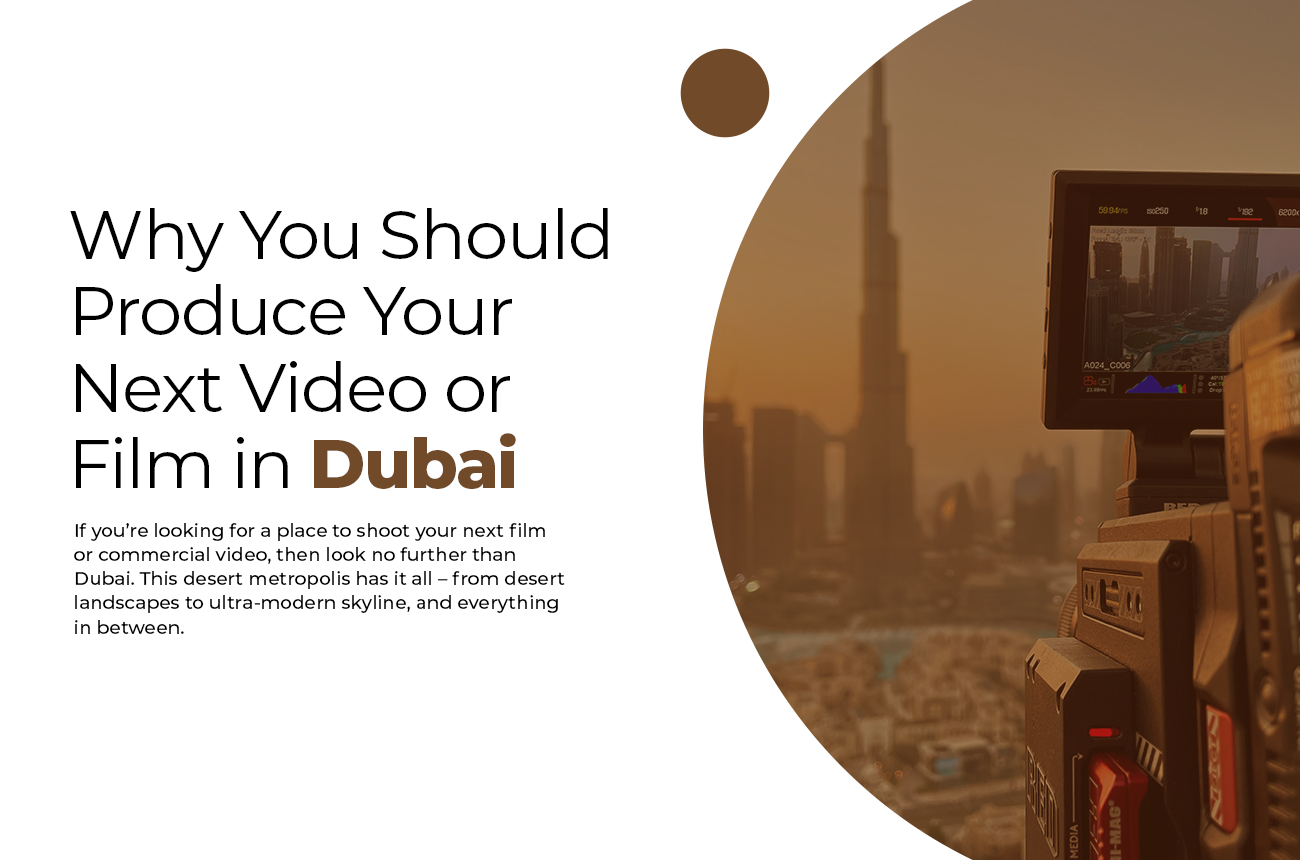 If you’re looking for a place to shoot your next film or commercial video, then look no further than Dubai. This desert metropolis has it all – from desert landscapes to ultra-modern skyline, and everything in between.

Dubai has become a popular filming destination for Hollywood blockbusters and independent films in recent years. The reasons for this are many – from the city’s infrastructure and facilities to its diverse culture and landscape.

So, if you’re thinking of shooting your next film in Dubai, then keep reading to learn more about why this desert paradise is the perfect place to do so!

Dubai is a Modern and Progressive City

Dubai is a modern and progressive city with a thriving economy. It has many financial institutions, business people, tourists, and cultural attractions. The United Arab Emirates (UAE) is located on the Arabian Peninsula in Southwest Asia. Dubai is the second largest city in the UAE after Abu Dhabi.

Dubai is one of seven emirates that make up the UAE federation. Dubai has been developed into one of the most important tourist destinations in the world with its luxurious hotels and resorts as well as shopping malls that offer international brands at affordable prices for visitors from around the globe who come here to shop or attend conferences or exhibitions held at these venues.

The Weather in Dubai is Fantastic for Filming

In winter, it's cooler but still warm enough to shoot outdoors during the day and late into the evening (around 5pm). You could also use fog machines if you want to create a misty atmosphere.

Dubai Has Great Locations for Filming

With its stunning architecture and beautiful desert landscape, Dubai is a great location for film and video production. There are many different areas of Dubai you can use as your filming location.

One of the most popular filming locations in Dubai is the Palm Jumeirah, which is a man-made island that has been shaped into a palm tree shape with artificial beaches along its perimeter. This location provides an ideal setting for filming any beachfront scenes or videos that feature water sports such as surfing and swimming.

Another popular filming spot in Dubai is the Dubai Marina area, which features plenty of high-rise buildings and modern architecture to provide an interesting backdrop to your film or video project. If you want to shoot scenes at night then we recommend using the Burj Khalifa tower as your backdrop—it’s one of tallest buildings in all of Asia!

Rooftop access is legal in Dubai which makes it perfect for shooting a film or video. The city is full of high-rise buildings and there are plenty of rooftops to choose from. You can even get a bird's eye view of the iconic Burj Khalifa.

There are some things to keep in mind though. Rooftop access is only legal if you have permission from the building owner. And you should always be aware of your surroundings and take safety precautions, especially if you're shooting near the edge of a roof.

But if you're looking for a unique location to shoot your next film or video, Dubai's rooftops are definitely worth considering.

We at UAEFilmPermit have been helping filmmakers and photographers produce content in Dubai for years now. In fact, we've helped productions shot some of their most iconic scenes on rooftops in the city. So stop waiting, start planning your next shoot, and let us help you.

You Can Get Film Permits Easily in Dubai

If you're planning to shoot a film or video in Dubai, you will need to get an official permit. It can be a lot of paperwork to get this permit, but it's worth the effort because once you have it, there are no restrictions on what you can and cannot do with your production.

The good news is that filming permits are easy enough to obtain online—you simply have to fill out a simple form and attach some documents. Once your application has been processed, your permit will arrive in a few days.

It's Quick to Get Around Dubai

The metro system makes it easy for filmmakers in Dubai to get around town quickly – even if they are on foot. There are several stations located within walking distance from each other so that you can easily get from one location to another without worrying about traffic congestion or having trouble with parking.

Plus once you visit any one station there are maps with information about all other nearby stations as well as how many stops away each train stop is located so that you know exactly where everyone else will be going when they board your train on their way home after work!

Flight Connections to Dubai are Getting Better

The good news is that flight connections to Dubai are good and getting better all the time. There are plenty of airlines flying into and out of Dubai, including Emirates, Qatar Airways, Turkish Airlines and Etihad. You can get a flight from most major cities in the world to Dubai these days (including New York City).

Dubai also has an airport with 2 runways (one long one and one short one) that can handle landing large aircraft like Boeing 747s while still managing traffic efficiently enough for you not to notice any delays in your journey home after shooting your film or video here!

Dubai has long been known as a global filmmaking hub, and for good reason. The city has some of the best film crews in the world, making it the perfect place to shoot a film. From experienced directors to skilled cinematographers, Dubai has everything you need to make your film a success.

And it's not just the film crews that make Dubai a great place to shoot a film. The city also offers a stunning backdrop, with its gorgeous architecture and stunning desert landscapes making it a top of the list.

All the Technical Equipment You Need is in Dubai

In Dubai, you can rent camera and sound equipment from local suppliers. You don’t need to fly it in from another country. Many of these companies have been around for decades, so they know what works best for different types of shoots.

If you are looking for something specific, such as an underwater camera, a crane or a Steadicam rig then we can help you out with that too!

The Dubai Film Festival is Held Every Year

Every year, more than 1.1 million people come to the Dubai Film Festival and watch films from around the world. The festival is one of the largest in the Middle East and has been running since 2004.

It’s an excellent opportunity to show your new film or video to a large audience and get their feedback on it. You can submit your film to the Dubai International Film Festival via their website or by post.

Plus, there's no shortage of things to do in Dubai when you're not shooting, from shopping and dining to exploring the city's many sights.

If you're thinking about making a film, Dubai should definitely be at the top of your list of potential shooting locations. With its incredible film crews and amazing locations, Dubai is the perfect place to bring your film to life.