Top 9 Locations to Shoot Your Next Film in Dubai 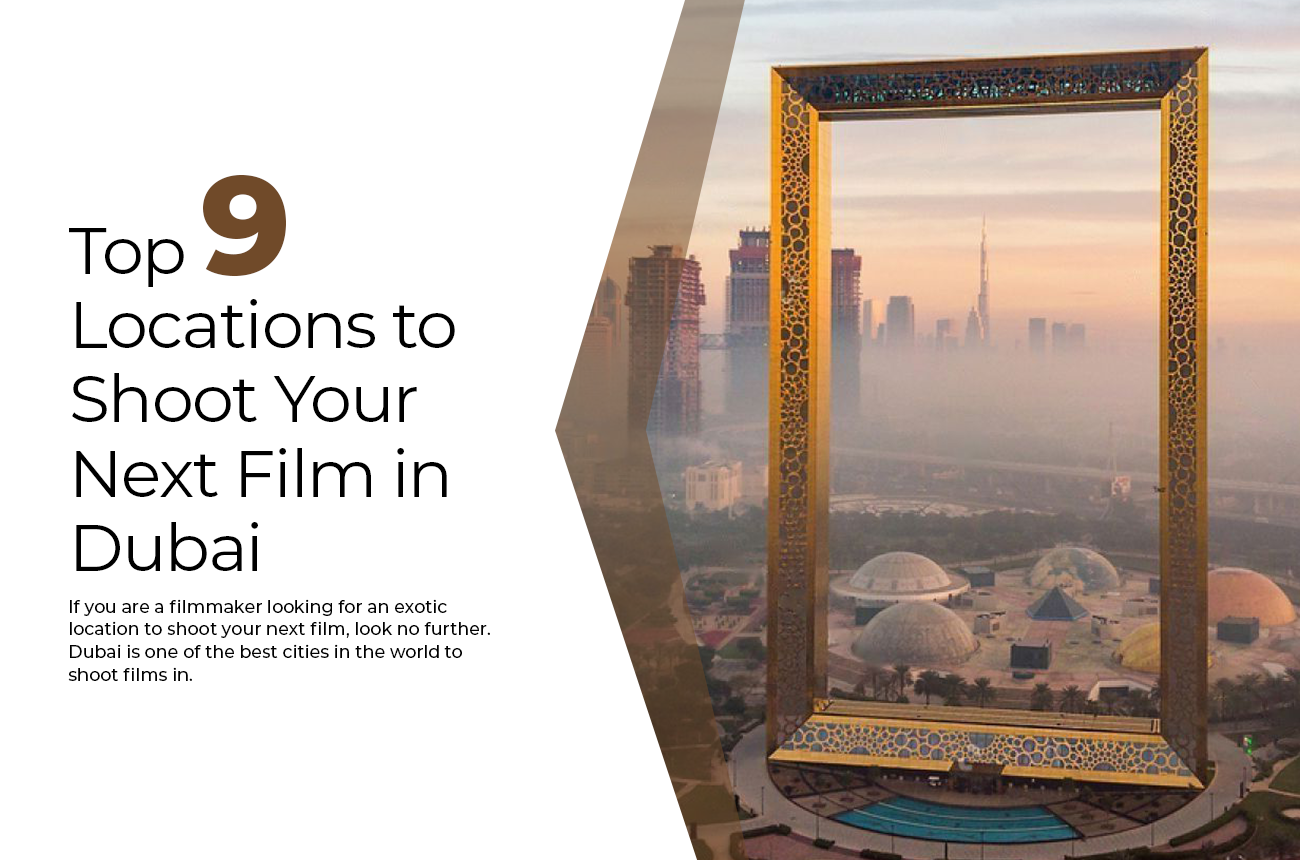 If you are a filmmaker looking for an exotic location to shoot your next film, look no further. Dubai is one of the best cities in the world in which to shoot films. Dubai is home to some of the most beautiful architecture in the world, making it an excellent place for filmmakers who want their films to show off Dubai's grandeur.

It is a city rich in architecture, nature, and diversity that offers great film locations for various genres. From the desert to skyscrapers and futuristic designs, it's no wonder Dubai is often used as a filming location that makes an excellent backdrops for Hollywood movies.

Take a look at why this is the case, and what some of the best locations are!

The diversity of landscapes in Dubai makes this city an ideal location for filmmakers who want their films to look authentic or exotic. You can find mountainside locations where you can shoot scenes involving snowboarding; deserts where you can shoot action scenes such as car chases; or beaches where people go surfing or kiteboarding!

Dubai is a melting pot of cultures and nationalities, with people from all over the world living in harmony and sharing their stories. The city is a great place to shoot films with a multicultural theme, as you can use the real-life diversity of its citizens to add authenticity to your film. If you're thinking about shooting a film with an international feel, Dubai will be able to offer some excellent locations for filming your project.

The city has a rich history, dating back to the 18th century as a small fishing village. As trade and commerce expanded throughout Dubai, so did its population. As a result, the city saw an influx of immigrants from all over the world who brought new ideas about art, architecture, and culture. Today you can see their influences in every corner of Dubai — from the slums at Deira to the skyscrapers on Sheikh Zayed Road.

This rich history is reflected in everything from its traditional architecture (known as mashrabiya) to its modernist skyscrapers (the Burj Al Arab).

The architecture in Dubai is unlike anything else in the world. The buildings are massive and bright and glisten in the sun. There's a reason Dubai is called "The City of Gold."

You can see so many different types of architecture here: from modern skyscrapers to ancient mosques, there's something for everyone to enjoy! And even though you may think it's all just glass and steel, there's a lot of detail involved — you just have to know where to look.

Dubai has also been known for its film-friendly policies since 2007 when it started issuing filming permits to international production companies annually. The location has been used in many productions and helped establish Dubai as a filming location. The result? Many well-known films were shot here, such as

Top 5 Places to shoot in Dubai

Dubai is a city that's constantly changing, and with new developments taking place all the time, it's challenging to keep up with what's new and what's gone. However, the city is a hub for creativity, innovation, and plenty of locations to choose from.

Here are some of the most sought-after locations in Dubai to film your next project:

This one is obvious, as it's the only dedicated studio complex in the city. The studios are located outside Dubai Marina and boast state-of-the-art facilities for everything from filming to post-production. The facility has four stages, including a green screen. In addition, there are several outdoor locations on site where you can get great shots of Dubai Marina itself.

Consider shooting your next film in Dubai Marina. It is one of the most expensive places to live in Dubai and is situated on the Jumeirah Beach coastline of the Persian Gulf. It was constructed by Sheikh Mohammed bin Rashid Al Maktoum, who was known to be an avid sailor and offshore powerboat racer. He wanted his people to have access to sailing and water sports, so he built a waterfront city with hotels, restaurants, shopping malls, and yacht clubs (you can rent boats here!).

The area has developed into a thriving community with rising residential towers; many parks are scattered around so you can take your kids or pets for outdoor playtime!

It is an ideal location for any yacht party scene or a romantic sunset shot. It's also perfect for a night out with friends or a family gathering, as it has different areas to suit all occasions. You can even hire one of their private luxury yachts if you want to take it up a notch!

If you're looking for some action scenes and stunts, this is the place for you! The waterpark has many exciting slides, rides, and attractions for everyone in your crew. You can even rent out the whole park if you need more space!

It is an excellent choice to capture some heart-racing action in your film! Skydive Dubai offers tandem skydives where you jump out of an airplane with a qualified instructor strapped to your back, all while filming at 120mph down towards the desert below!

It is a tall building that has a museum and a hotel. The building was designed by architect David Fisher, who also designed other buildings such as the Burj Al Arab, Emirates Towers, and Fairmont Hotel. The total height of Dubai Frame is 150 meters, making it one of the tallest buildings in Dubai. You can shoot your film in many places in this location, such as on its observation deck or inside the museum itself if you have access to it.

The building is a landmark and symbol of Dubai, so if your film is set in Dubai, it makes sense to feature this beautiful skyscraper. For example, you could film some action scenes on top of the building or use them as a backdrop for a romantic scene between two lovers. It's one of the most recognizable buildings in Dubai, so it would be great if you could include it in your film!

The tower has its zip line (which you can use to get some great shots) and an observation deck where you can take even more impressive photos. If your story involves travel or adventure, this could be an ideal location for you.

The Dubai Mall is one of the largest shopping centers in the world, with over 1,200 shops and restaurants. This location is perfect for any commercial or tourism-based production, as well as art films that want to capture the bustling atmosphere of this famous mall.

To film here, you will need permission from Dubai Mall and Emaar Properties (the company that owns it). It’s important to note that you can only shoot in certain areas within the mall; contact them directly for additional details on where these locations are located. There are no fees associated with filming here — just ensure your crew doesn't disturb any shoppers while shooting!

The Palm Jumeirah is one of the most luxurious places in Dubai. It is home to some of the world's most luxurious hotels, such as The Atlantis and The Burj Al Arab.

It's also a popular spot for film shoots because it's filled with palm trees and exotic animals, making it a great place to shoot a movie on an island. In addition, Palm Jumeirah boasts some of the most stunning views in Dubai; with its white sandy beaches and crystal clear waters, no wonder it's one of the most popular locations for filming in the city!

The Jumeirah Beach Walk is another excellent filming location with its long stretch of white sand beach and plenty of palm trees surrounding the area, providing excellent shade during those hot summer days! This area has also been a setting for several big-budget Hollywood movies, such as X-Men: First Class (2011).

Although these locations are available for use to the public, you will need to have a film permit from Dubai Film Commission, and we can help you get that.

We have been working in the industry for years and know all about the process of getting a film permit in the UAE. We can also help with all aspects of your film shoot, including casting, locations, catering, and transport.

We hope these locations will spark your creativity and help you decide where to shoot your next film in Dubai.