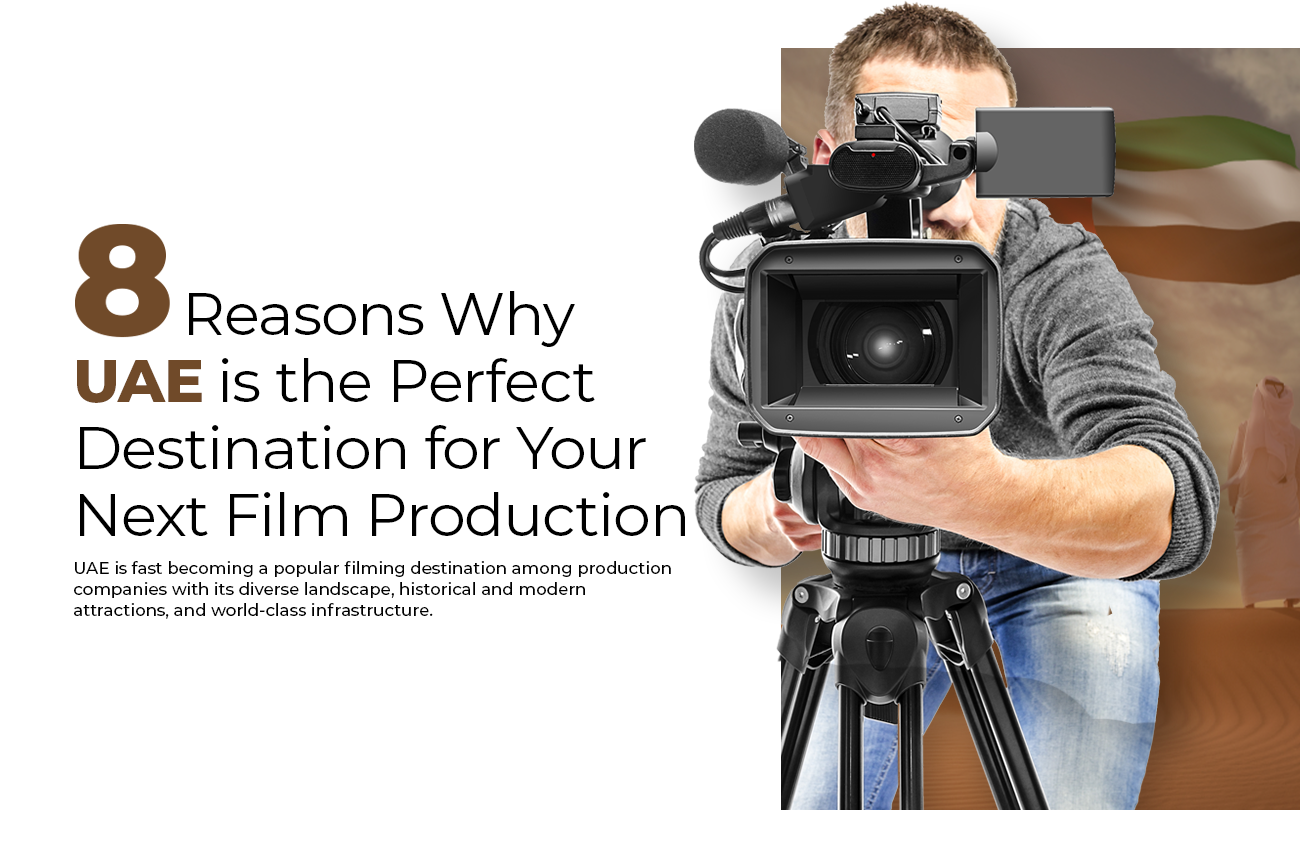 The UAE is fast becoming a popular filming destination among production companies with its diverse landscape, historical and modern attractions, and world-class infrastructure. The UAE also offers generous government incentives for production companies, making it an ideal location for filming.

If you want a film permit in the Middle East or have other questions about filming in this beautiful region, let us help you!

If you plan to film in the UAE, it is essential to obtain a film permit. It is required by law, and failure will result in penalties, fines, or imprisonment. In addition, a film permit allows you to shoot non-commercial movies freely within the country’s borders.

However, if your project requires shooting outside of Dubai or Abu Dhabi, you might need to pay customs duties and other charges like a location fee or filming costs.

Who Needs a Film Permit?

All individuals who plan on filming in the UAE need an authorized permit issued by their local emirate before embarking on any production activities. For example, suppose someone wants to shoot their movie with friends without commercial interest. In that case, there are no requirements for permits since this kind of activity does not violate any laws or regulations set forth by local authorities (although we recommend still getting one).

However, suppose they decide instead that they would prefer to use professional actors and crew. In that case, they must apply for an approved document stating that all relevant permissions have been obtained beforehand through legal channels like ours.

8 Great Reasons to Choose UAE as Your Next Shoot Destination

The country offers the best of both worlds: an opportunity for filmmakers to explore their creative side while setting up their production in an environment that can accommodate all needs. If you are looking for a filming location and want to know why to choose UAE for your next film production, then we have the answers.

1. UAE has a Vast Range of Natural Beauty

When shooting outdoors, filmmakers can take advantage of the vast natural beauty of the Emirates by choosing from more than 7 million square kilometers of untouched wilderness — enough space to capture almost any shot imaginable. And since production costs are lower than in many other countries due to tax incentives, filming in this part of the world makes it easier for you to do what you do best: create beautiful films!

2. Largest Variety of Locations in the Middle East

The United Arab Emirates is the largest country in the Middle East and one of the most culturally diverse countries in this region. It’s also a federation of seven emirates: Abu Dhabi, Dubai, Sharjah, Ajman, Umm Al Quwain, and Ras al-Khaimah.

The country’s location in the middle east makes it an ideal place to shoot films with a Middle Eastern feel — but its diversity means that filmmakers will find something for any story they want to tell.

With production costs lower than in other major cities like London or New York City and plenty of sunshine throughout the year, filming in Dubai can be very cost-effective while still allowing you to capture everything you need on camera!

The UAE has a well-established film production infrastructure. Film studios, soundstages, and other facilities are available in Abu Dhabi and Dubai. It can be a significant advantage for filmmakers who want to shoot their scenes on location in these cities.

The country is rapidly changing into one of the most important economic powers in Southeast Asia, and its booming economy is attracting a lot of foreign production houses and investors from all over the world.

4. The Most Innovative Technology

UAE is where some of the most advanced, innovative, and updated technologies are being developed, tested, and used. So it’s no wonder many filmmakers choose to shoot their films in this country.

The UAE has some of the best sound technology available. Films like Marvel’s Black Panther have been shot here because these productions require excellent sound design and mixing capabilities. You could use some of the best audio equipment when filming your next movie or TV show in Dubai!

The UAE has an extensive pool of experienced crew members who can help you with whatever aspect of production you need assistance with: directing actors; producing your film; editing the footage into a cohesive narrative; designing special effects; shooting B-roll (behind-the-scenes footage) for use during post-production — you name it!

The best part about working with UAE-based professionals is that they will be more than willing to assist you with pre-production and post-production activities without charging additional fees.

You may be looking to film in an exotic location or have a specific story that calls for a specific feel. However, what if we told you that one of the most famous filming locations on Earth is right under your nose? Of course, we’re talking about the United Arab Emirates. The UAE has some of the world’s most famous tourist attractions and the best shopping malls in all of Dubai.

The Burj Khalifa in Dubai is currently ranked as the tallest building on Earth. It also houses other attractions like Aquaventure Waterpark and Dubai indoor ski resort!

The UAE also offers many different locations to shoot your scenes. You can choose from desert to beachside, cityscapes, or even combine all three! In all cases, the weather will be milder than most other locations while still providing plenty of sunshine for your project.

These things make it an ideal location for filming because you can find everything you need here: stunning locations, exotic customs, modern architecture, and comfortable hotels, as well as low costs compared to other countries such as China or India, which are known among filmmakers as cheap but not necessarily qualitative ones!

How to Get a Film Permit in the UAE?

Film permits are required in the UAE for all film and TV productions, advertisements, and photography shoots.

If you're planning on filming in the UAE, check out our guide on getting a film permit in UAE. It will help ensure you don't encounter any problems during your production shoot.

Let Us Help You

We are experts in facilitating film permits in the UAE and deeply understand the procedure. We understand that filming can be quite an important event for both the production company and the crew. Therefore, we ensure that everything runs smoothly and on time so you can focus on other aspects of your film shoot.

We can help you obtain a filming permit for all projects, including feature films, TV series, and commercials. We also assist with obtaining visas for foreign talents such as directors, writers, and actors to ensure they can enter the country without issues.

For more information about our services or if you want us to help you obtain a permit for your next project, please contact us today!