Filming in Dubai? Here's What You Need to Know About Location Permits 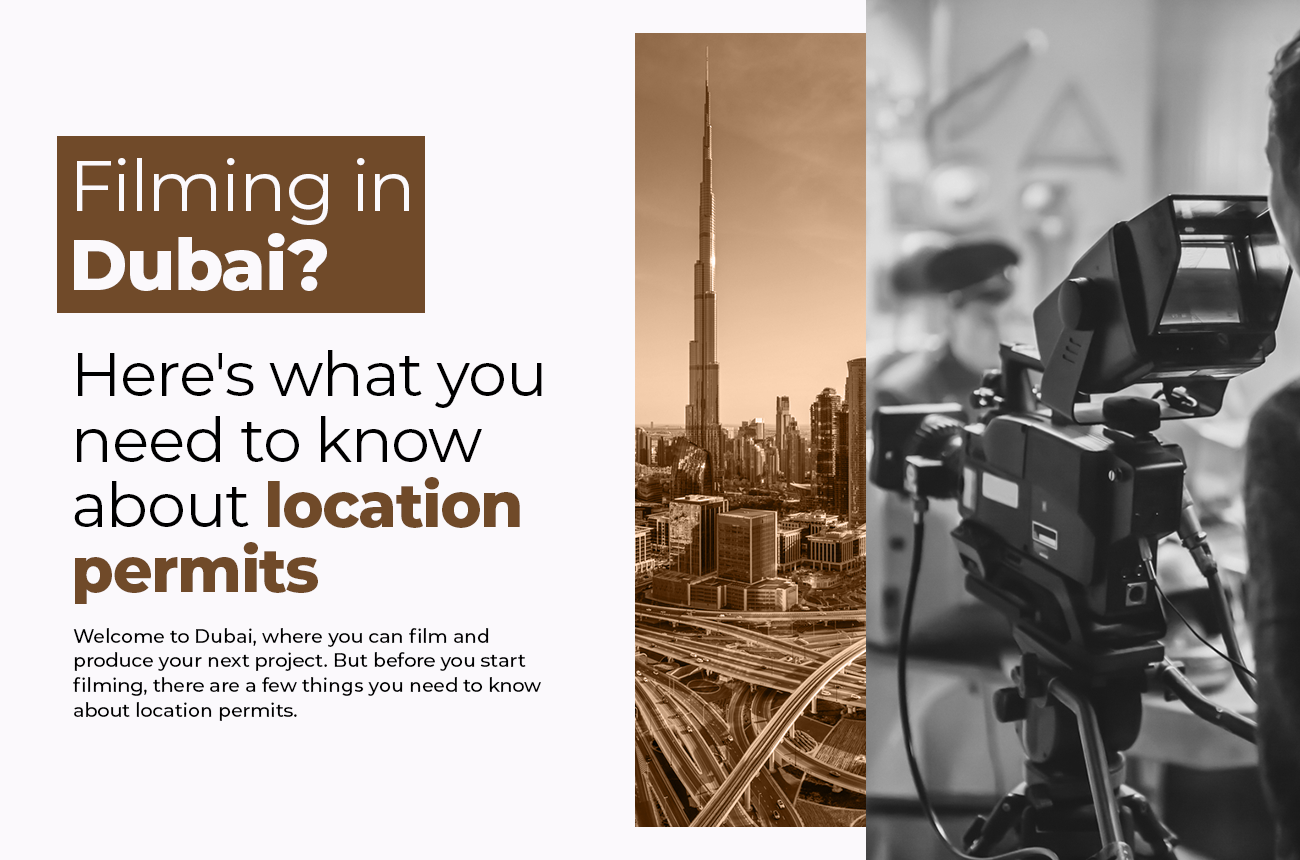 Welcome to Dubai, where you can film and produce your next project. But before you start filming, there are a few things you need to know about location permits.

Film permits are required for all commercial and non-commercial filming in Dubai, so it's essential to start the process early and ensure everything is in order.

In this post, we'll outline everything you need to get your film permit in Dubai and make your production as easy and smooth as possible.

What is a Film Permit?

It is permission needed to shoot a film in a particular location. It's required for commercial filming and on public land, as well as on private property.

UAE is known for its pristine beaches, beautiful architecture, and incredible landscapes—and it attracts tourists from all over the world. But if you're not careful with your camera, you could ruin someone else's vacation or beautiful memories.

It is where the film permit comes in to ensure that filmmakers respect the laws and customs of the UAE while protecting people from any potential harm from being filmed without their consent.

When Do You Need a Film Permit?

You'll need a film permit if you're filming in any of the following locations:

There are a few exceptions to the rule, however. Casual filming in a public space is not considered filming and will not require a permit. So if you're just shooting random footage of people walking down the street or even filming in one of Dubai's many malls (or anywhere else where people congregate), there is no need for a permit.

How to Get a Film Permit in Dubai?

You'll want to contact a respective film service partner like us as soon as possible. They will be able to help you get the permits you need, so they're essentially one of the first steps in getting started on your project.

When you first talk, you must explain your project and its purpose. In this way, the company can decide if filming in Dubai is the right choice for what you're doing and how they can assist you.

Once that's all out of the way, it's time for them to start looking into locations where filming might work well for what you're trying to accomplish with this project!

When applying for location permits, you must be specific about what you plan to shoot. The last thing you want is to spend time and money shooting your film only to discover that your permit was invalid because of a minor detail (like being too close to a school).

It's also important not to be vague when answering questions about where and when you plan to film. For example, if the location is private property, make sure that it will be okay with the production company to take over their space for a few hours or days.

Location permits can be challenging to secure, and it’s essential to be prepared for the unexpected. For example, if you want to film in a public place, you will likely need a permit from the local authority (or authorities) that govern that area.

It means that even if your production company has already obtained a location permit from Dubai Film and TV Commission (DFTC), you may still need additional approvals or permissions from other departments before filming can take place.

It's important to know who these other departments are and their requirements before starting your shoot so as not to disrupt the production later on.

It is also very likely that your shoot gets restricted, which comes with certain hoops you must jump through before acquiring approval; these could include: securing insurance coverage, changing your schedule, finding alternative locations outside of Dubai, etc.

A lot of Paperwork

If you're filming in Dubai, you'll need to obtain a location permit for any place that's not a public space. It can be pretty tedious and time-consuming, but your service partner will be able to help guide you through the process.

It's important to note that this process differs from getting permission from the owner of an actual location.

A respective authority obtains the permit by giving them a list of locations where filming will take place, along with other pertinent details like the number of cast members involved or the approximate length of shoot time.

The Importance of Having a Film Permit

A location permit is a legal document that allows you to film in a specific location. For example, if you’re planning to shoot in public areas, such as streets, buildings, and parks, you will need permission from the Dubai Film and TV Commission (DFC).

You will also need permission from the Department of Tourism and Commerce Marketing (DTCM) if you want to film in other private places, such as offices or hotels. Again, we do all the heavy lifting for you; apply for the permit here.

Tips for Your Next Shoot in Dubai

Here are a few tips to keep your costs down and get you going with your upcoming project in Dubai:

Let us Help You in Getting the Film Permit

If you're looking to shoot a film in Dubai, we'd be happy to help. Our 360 services can assist you with everything from location permits and equipment rental to crew and cast. We have the resources and expertise to make your shoot go smoothly, and we understand the local regulations better than any foreign crew could.

We've also worked with some of the city's most talented crews and actors, so if you need someone who knows their way around a camera or has an ear for dialogue (or both!), there's no one better than us!

Just give us a call or send us an email so that we can take care of everything as quickly as possible.

Now that you know all about film permits in Dubai, what are you waiting for? Start planning your next shoot!

Still, have more questions? Check out our FAQ section below for more information.

1. How long does it take to get a film permit in Dubai?

The process can take up to 4-5 working days, so start the application process early.

2. Do I need a film permit to shoot a music video?

Yes, all commercial and non-commercial filming projects require a film permit in Dubai.

3. How much does a film permit cost?

There is no set fee for a film permit in Dubai. The price will vary depending on the scope of the project or film.